What the skibob is?

A bit of history

The first mention of skibob dates in the year 1892 when the American Stevens patented the first skibob. In fifties of 20th century the Austrian E. Brenter completes the skibob with mini ski fixed on rider’s feet. Thanks to them the rider gets another two contact points with the slope and thus the increased safety in skibob riding. Mini skis are only little bit longer than the boot and thus the risk of ski jamming and subsequent leg fracture is eliminated. Originally the skibob was one of few options for people with troubles with knees how to do alpine skiing but very soon it has got the popularity also among healthy people. In the year 1961 the International skibob federation – FISB – has been established. Today it has its office in Munich and associates about 20 national skibob federations among which the most important as Austria, Czech Republic, Germany, Switzerland, France, USA, Canada, Great Britain and Poland belong. Since 1967 the World championship is held every year and recently also the series of the World Cup. The competition includes the downhill race, slalom, giant slalom, super G and the parallel slalom. 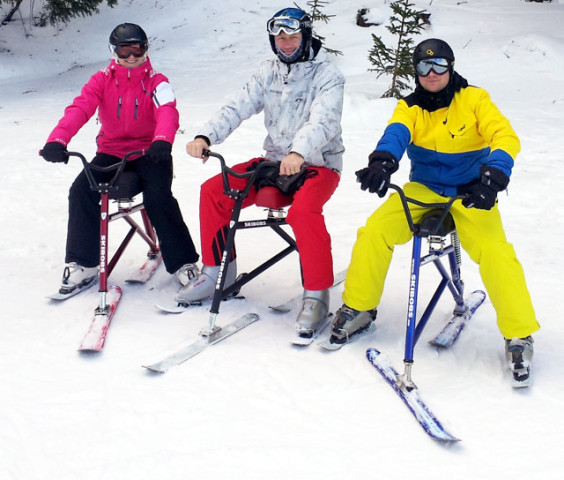 There is an interesting and independent category of the skibob sport focused on speed records on the so-called flying kilometre. It is extremely dangerous discipline.  It is necessary to find the steepest and the longest slope for these attempts. Then the snow is smoothed down and rammed down, usually manually as the slope is so steep that no machinery can enter it. When the terrain is suitably adapted, two electronic measuring gates are places at the distance of 500 metres (on the upper and the lower slope section). The racer aims to ride the skibob at the maximum speed between these gates. The time of measured section is converted at km/hr. The racer has to repeat it again in the second race. Both results are converted in an average result. Today the world speed record value on the skibob is 204 km/hr. In case of ski it is 251 km/hr.

Do you wonder why there is such difference between the world speed ski and skibob record? There is only one simple reason – the length of skis. The longer the skis are, the faster you go down. Skiers of this discipline use much longer skis than it is possible for the skibob.

Equipment of the rider (according to FISB)

The rider uses the single-track steerable skibob that shall be equipped with the front steerable ski and the following rear ski in the same line. The obligatory equipment includes also 2 mini ski fixed on feet of the racer. The skibob as well as skis can be produced of any material. For all disciplines of seniors as well as juniors the maximum length of skibob is defined at 230 cm with allowed variation up to 5 cm and at the maximum weight 23 kg plus 0,5 kg of tolerance. For the age group of children the skibob length is defined at the maximum 230 cm and its weight must not exceed 13 kg. The length of ski is unified for all disciplines and all age groups and is determined at the maximum allowable clearance length 55 cm with the tolerance of 5 cm. It is not allowed to use any supplementary weights in order to increase the total weight of the skibob, for example by the lead jacket, and the racer can use only the usual clothing. The closed helmet belongs to the obligatory equipment of the racer according to FISB. It is allowed to use the opened helmet for the slalom and the parallel slalom.

Analogous to the skiing or the snowboarding, the basic equipment includes the suitable waterproof trousers, the quality helmet with fitting ski glasses and ski gloves. We also recommend using the hip spine protector. The security straps preventing the mini ski to run away as well as the lock against the skibob theft during the refreshment in the ski centre are advised.  In addition, the small bag used on bicycle frame could be also useful. Here you can store your cards, car keys and other small objects that could be inconvenient being stored in your pockets during your ride.

A year on the seat

Even in winter you do not need to dismount the seat – cycling in summer, bobbing in winter.